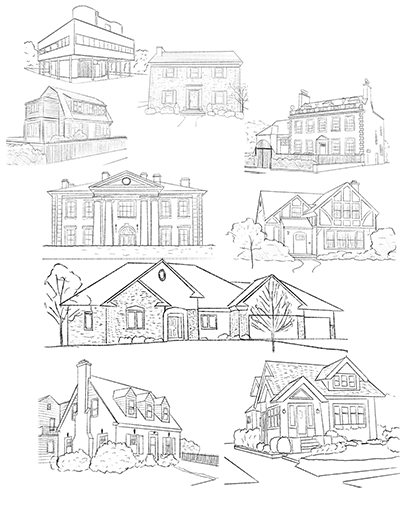 What makes a house a particular style? Styles are visual, but they are also a form of construction detailing craft and intellectual and cultural building traditions of an earlier time. Housing styles are a reflection of the values, priorities and technological achievements of the period when they were built. Styles give a house its character as well as position its connections to earlier periods and places. Populations migrating to new countries brought their local building craft and constructed familiar styles. From the saltbox, Georgian, Federal, Greek Revival, and Italianate, houses recall history and culture in their appearance. When people look for a place to call home, they look for location, neighborhood, cost, size, but also, what the appearance of the house represents. Together housing characteristics offer a variety of lifestyles and looks. Today there are more home types and styles than ever. Take a look at NEXT.cc Facade Elements, Housing Types, and Vernacular Architecture. Explore housing styles in your neighborhood and around the world!!

What style is your house? You can read the style, or language, of your house if you know where to look. Starting from top to bottom, the shape of the roof, the size, geometry, and the number of windows, the overall configuration of the floor plan and the facades (from simple to complex) all contribute to its style. Can you read history in your house? Go outside and look at where you are living. Make a sketch or photograph it from the front. Observe its form, detail, and appearance. Look at its proportion, material selection and detailing to find clues as to its style. Styles give the house character as well as position its design in time. Outline the key elements that contribute to its style and label them. Now look at the following popular styles in the United States and see if you can identify your house! Make a drawing of the house and label its details that define its style.

The Tudor style comes from 16th Century Tudor England. Tudor homes have steeply pitched roofs with sharp gables over a mixture of materials including brick, half wood timbers, stucco, and patterned stone. The lumber in the original homes was structural, but today it is often ornamental. Rooms in Tudor homes tended to run on the smaller side similar to the original English houses, and each room has its function. Narrow casement windows with large wooden frames are singular or grouped in bands. Bay windows or windows that bow out have a window seat inside and sometimes even protrude out from the second floor. Tudor homes were popular from 1920 to 1940, especially in upscale suburbs and can be found in many neighborhoods today.

The Cape Cod house comes from New England, especially the area on the coast of Massachusetts known as Cape Cod. The homes’ simple gable form is often called the ‘salt box’ and resembles the shape of wooden sheds used to store salt. Cape Cods are one and a half stories and typically covered with wood shingles, with a large central chimney, and gabled dormers. They have a living room stretching across the front of the house with the back half containing the kitchen, a centrally located stair, and a first-floor den or bedroom. The front façade has a central door with windows on each side and a sloping roof with dormers for the upstairs sleeping areas. Cape Cod houses are compact and functional and in many ways represent the most common graphic concept of a home. They were very popular during the 1920s and 1940s and remain a standard typology for single family living.

Neoclassical homes draw details and layouts from classical Greek and Roman architecture. The ‘neo’ added at the beginning means a ‘new’ use, or reuse, of ancient traditions. The Renaissance architect, Andrea Palladio, first brought columns and entablatures to dwellings on the four symmetrical facades of the Villa Americana, or Rotunda, in Italy. Architects built neoclassical architecture at the White House and in the Capitol Building. Libraries and other civic buildings encouraged home builders to use the classical language. From the 1850s to the 1860s, Greek architecture was popular in the United States. Greek Revival sometimes known as national or federal style homes have free-standing columns holding an entablature and portico over the centrally placed front door. Neo-Classical designs are symmetrical, or balanced on a central, formal entry; classical columns and orders of the Greeks and Romans revived in housing styles in Europe and the United States from 1895 through 1920 and remain popular today. Georgian, Greek Revival, Federal, and Italianate, are all examples of classical symmetry.

Georgian homes are simple rectangular two story homes with a symmetrical façade centered on a central door with a temple-like a portico and symmetrical windows with classical detailing. Georgian style houses illustrate formality and impressiveness while a Cape Cod home is romantic and cozy. Federal Style houses are formally balanced as well, but more often wood clapboard than brick. Greek Revival houses, with evenly placed balanced windows to the left and tight of a central door, were detailed with free-standing Greek order columns. Italianate houses incorporate arches on top of columns for a front portico and often have arched windows in solariums or sunrooms. Find examples of Georgian homes in your neighborhood and sketch them and label their distinctive details.

The three phases of Victorian architecture in America were Early Victorian, High Victorian, and Late Victorian as the homes became more and more lavish. The Queen Anne house is one of the most popular styles from the 19th-century Victorian era. It is a romantic style utilizing Medieval towers and turrets reminiscent of the Middle Ages. While it has Queen Anne’s name, it does not represent 18th-century English styles of homes. Rather, the Queen Anne style had long sweeping porches, painted wood shingles, turrets, and ornamented trim and became the choice for the wealthy from 1875 to 1895. Many surviving Queen Anne houses are painted white, but the originals were multi-colored. Elaborate exterior woodworking, called “Gingerbread,” showed off the “tricks” of the new power saws. Porches, balconies, and bay windows add variety and “bring the outside in.” The multiple roofing types and ease of construction of Queen Anne Houses were made possible by new balloon frame construction or the method of planning wood and using nails. This invention revolutionized the housing industry by mass-producing parts easily assembled. Find examples of Queen Anne homes in your city; sketch them and label their distinctive details.

The bungalow, or craftsman style house, is a home created by the Arts and Crafts movement in part as a reaction to “Victorian excess,” from 1910 to the Great Depression. Some builders offended by the Victorian ornamentation preferred the simplicity and beauty of natural wood materials. Wood trim and walls replaced painting and decorative wallpaper. Contemporary architecture, today, continues to respect the natural use of materials. Rafters, or braces, support the roof and overhangs shading rooms in the summer. The structures long, low-pitched roof, often with a gable dormer or a shallow “shed” windowed roof, offers a feeling of security. Bungalows are highly flexible and offer a lot of living space in a compact area. May owners finish the attic area for extra room. Find some bungalows in your city; sketch them and label their distinctive details.

Ranch houses arrived on the American scene in the mid-1930s in response to a rapid need for simpler suburban living. The single roof and single floor dwelling of the typical ranch home is a very economical form to construct though it often covers more land than a two story home. The ranch home hearkens from buildings on working ranches with large acreage. It resembles their low horizontal massing.. For post WWII suburbia, this style offered a welcome spaciousness and large green lawns far from the density and dirtiness of the city. Early single story homes have a front dominated by a large, usually fixed, “picture window’. Later ranch houses include side garages. Simultaneous to the development of new ranch style suburbs in the 50’s came the arrivals of television, air conditioning, and the automobile. Many homes gave the front of the house to the garage while a less public rear patio served some of the traditional porch’s function. Today’s ranch style homes in the west and southwest are often single story Spanish adobe designs. These became popular in California and spread eastward, as did many architectural styles of the 20th Century. Split-level homes are related to ranch houses, but with three levels of living areas. The main floor usually contains the living room and the kitchen opening to the front and back of the lot. The split levels feature bedrooms, baths, and recreation rooms. Draw a ranch plan and elevation and label its rooms and features.

Modern architecture is functional, rational, and uses latest construction methods. In the 19th century architects moved from style as decoration to a language of construction and space. Modern houses rebelled against any reference to past “decorative styles” and created ornament free boxes for modern “open space” lifestyles. Functional, geometrical, and simple flat roof forms offer open floor plans. Windows, historically vertical in proportion, stretch from floor to ceiling or become horizontal strips encouraging ‘free movement’. Larger expanses of glass connect the outside views with the inside. Modern houses built today in older neighborhoods are very visible with their large glass windows, flat roofs, and open floor plans. The work of Johnson Schmaling’s Camouflage House, featured here, show conceptual development from the idea of a Camouflage House in the woods, with colored and clear glass and stained and natural wood exterior mirror nature’s trees and colors. The diagram of architectural elements that configure the design of the house reveal the architects’ key form and space making strategies. FInd a modern house in your neighborhood and draw or photograph it and label its key parts.

What kind of house do you dream of living in?