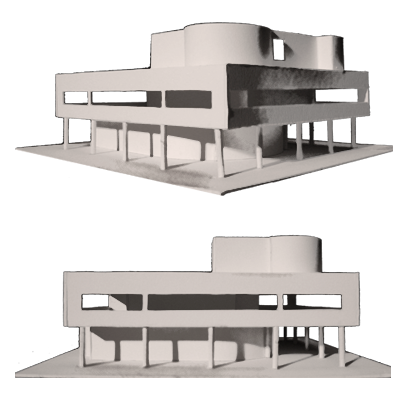 Out with the old! In with the new! Modern architecture is architecture that emerged in the 1920s in Europe and the United States. It began as a response by architects to rapid technological advances and greater urbanization of society at the turn of the century. Modern architecture is known for its use of new materials and new construction technologies. Modern architecture is architecture of simple forms (rectangles) enclosed with flat opaque (solid) or transparent (glass) walls. The new materials - glass and steel changed the look of buildings, the experience of being inside looking out, and construction time and technique. Watch Iconic Houses to see elements of balance, composition and inside outside relationships. Steel and glass engineering produced skyscrapers - a new building type that transformed skylines around the world and pushed living in the sky to new heights! Modern architecture is considered progressive (forward looking) rather than regressive (backwards looking or stylistic). The assembly of standard components and new technologies of travel - particularly cars, ships and aircraft - inspired imagery of an optimistic, heroic and progressive era. Modern architecture expresses volume (rather than mass), balance (instead of symmetry) and elimination of ornament (or applied decoration).

Out with the old! In with the new!

Take a look around your city. Do you see tall buildings that have flat roofs and flat facades? Find three buildings that look ‘modern’. Research when the buildings were built and what they are used for. Draw a perspective sketch of each building showing how the buildings fit into the skyline. (Google Earth 3D may be a useful reference). Then draw details that express the construction. Reveal modern materials and joints.

Be a modern muse! 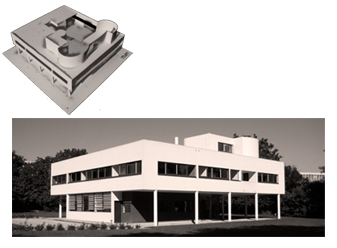 Research houses built between the 1920’s and 1950’s by one of the modern architects listed. Find images of plans, sections and elevations. Copy the drawings and look at the flatness of the walls and the flow of internal space. Study the elevations and analyze the relationship between the solid and void parts of the walls, the structure, and the large glass areas. Build a Model of one of the modern houses.Watching the modern house videos will help you understand how to see space flow into and through the rooms. 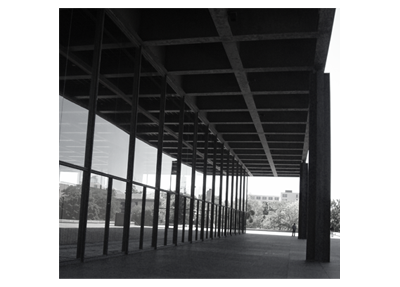 Ludwig Mies van der Rohe (1886-1969) was a leader of the Bauhaus School in Germany. He organized an exhibition for a new housing idea called the International Pavilion that offers a continuous flow of space framed by horizontal planes ordered by geometry of structure. In 1938, Mies van der Rohe started a twenty year period as head of the Illinois Institute of Technology in Chicago, Illinois. During his leadership he designed the master plan for the campus and several buildings. Mies designed rectangular boxes of brick, glass and steel laid out on a 24-foot module. The 24-foot module organized even the landscape. The buildings were straightforward, simple steel, brick and glass boxes reflecting his famous quote, “Less is More.” Research the Barcelona Pavilion, IIT’s Crown Hall, and [Lafayette Park}(https://www.archdaily.com/455524/ad-classics-lafayette-park-mies-van-der-rohe), Detroit. Choose one of them and draw the plan and elevation. See if you can find the module that Mies used to organize the design! 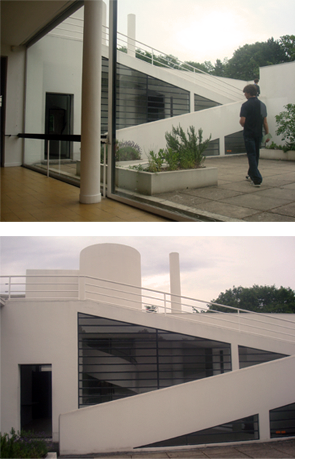 Le Corbusier , a Swiss born architect (1887-1966) believed that the best efforts of 1,000 men converge slowly towards the most economical and certain shape - the object. Le Corbusier was interested in pure form and used primary geometries such as spheres, cubes, rectangles and cylinders. Combining geometry and engineering of machines, Le Corbusier wrote in Vers Une Architecture (Towards an Architecture 1925) that the functionalist ideal coupled with universal harmony existed in the Greek Temple as well as the automobile. The Villa Savoye at Poissy, France (1929-31) is lifted up off the ground by a grid of free standing columns. The facade is non-structural and free to be open or closed. The plan is likewise free to infill between the columns or move independently opening rooms to each other or even to the outside. Factory-type ribbon windows line the exterior to provide full views of the landscape. The Villa Savoye even has a roof terrace and garden. Le Corbusier’s designs provided continuity between interior and exterior space, and the freedom of elastic, internal divisions in the plan. Le Corbusier believed that architecture was the masterful play of light on form. Draw the four elevations of Villa Savoye, Le Corbusier’s “machine for living.” 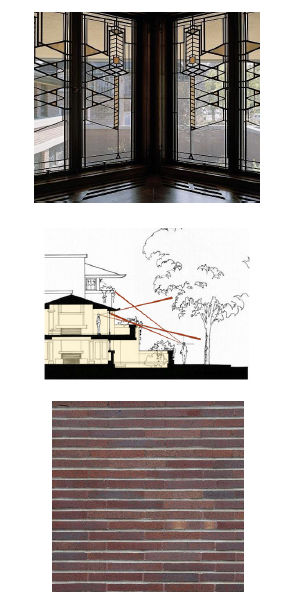 Frank Lloyd Wright declared that Wright’s buildings stand out among the most significant architectural works during the last 100 years in the world. Frank Lloyd Wright wrote, “A building is not just a place to be. It is a way to be.” “A home is a place of both prospect and refuge.” Create a poster about Frank Lloyd Wright’s prolific career!