The word science comes from the Latin word for knowledge, scientia. Science is a process that builds knowledge and bodies of knowledge through investigation and experimentation. It is an integral process to introduce in K12 as it leads to skills that encourage critical thinking and life long learning. Once aligned with philosophy or the investigation into the ‘nature of things’, the two ways of ‘construing knowledge’, science and philosophy, converge in what E. O. Wilson calls ‘ consilience’. In short, science construes facts and rational methods whereas philosophies construe value, understanding and a culture of reasoning. Design as a practice and as a body of knowledge intertwines philosophy with its theory of practice and with science’s study and interaction with complex systems of knowledge.

We are born to learn. We are born to create. We are born designers. Our brains through 7 million years and 350,000 generations have been wired with over one hundred billion neurons set to learn 24 hours a day. Inside we hold the repository of everything human- the skills that have developed and the music, writing, dance, art and stories that have been told. All of this is ready to be awakened in our imagination. Scientists now know that parts of our brain lie waiting to be triggered in certain stages of our life by certain events; if we miss these triggers much of the potential to awaken this imagination disappears. Before children sit in desks in school to learn, they trigger imagination through everyday play, exploration and problem solving. They learn on their own through informal learning, or the tacit knowledge that each of us brings to light by who we are, the talents we have, the people we know, the places we visit, the music we listen to and the dreams we dream. 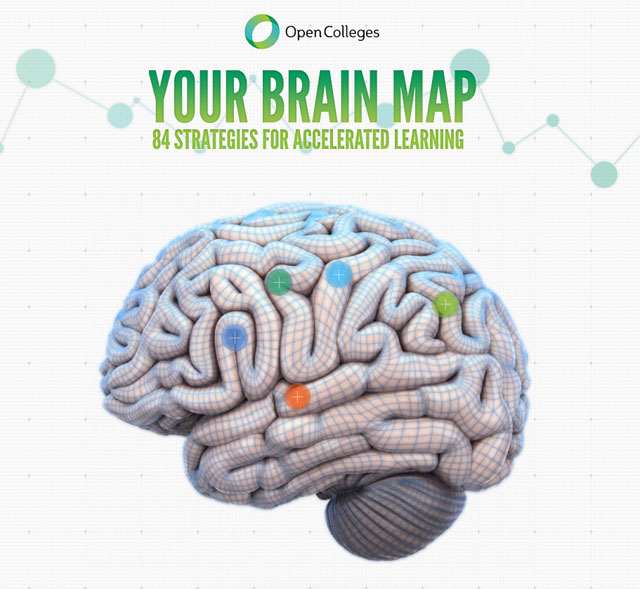 An interactive infographic by Open Colleges

Our research celebrates education’s need to nurture curiosity and imagination with a mandate to connect children’s’ informal learning with directed instruction to motivate life long learners and engaged citizens. It is founded on the fact that creativity is an inherent human trait that knows no specific, race, creed, age or income. It respects education’s intent to support each individual’s potential for a life of purpose. This approach, prefaced years ago by Dr. Howard Gardner demands that teachers be equipped with a variety of strategies and techniques to choreograph learning for each individual (Gardner 1983). Design is human intention and forms the basis for how humans evolve, create and coexist in the world. Most people live in designed worlds. Many people spend ninety percent of their lives indoors surrounded by designed objects, leaving to take a designed object to another environment designed by someone, somewhere, sometime. Our research aims at increasing awareness of the necessity of design learning and disseminating design opportunities (curriculum, pedagogy and assessments) to reach teachers (and their students). As Herbert A. Simon, pioneer of computer science and artificial intelligence writes, “ Everyone designs who devises course of action aimed at changing existing situations into preferred ones.” This, for most of us, is a life of purpose.

“Since new developments are the products of a creative mind, we must therefore stimulate and encourage that type of mind in every way possible”. George Washington Carver

Artists and scientists Investigate the world.. Many of the tools they use to explore and experiment are the same. Americans for the Arts report that if a child fails even one class in middle school they are 50% more likely to drop out of high school making the middle school years formative to success in school and possibly in life. In support of nurturing creativity, they report that students who take art in middle school are four times as likely to be successful in high school (AFA, 2012, p. 03). Students with creativity education are more likely to attend college. They are more likely to succeed in the workplace and in life. Education needs to embrace creativity allowing students to use what they know (AFA, 2012). In addition, 93% of Americans believe that the arts are key to a well-rounded education (AFA, 2005, p. 23). As or more important is the finding that 72% of employers site creativity as an important ingredient for new hires (AFA, 2012, p.13).
Americans for the Arts.PDF

“Arts-based learning has emerged as an experiential and interdisciplinary approach to STEM education that is increasingly seen to offer a distinctive new set of tools to advance creativity and engagement among STEM learners.” The Art of Science Learning

A 2012 National Governor’s Association Report promotes the importance of design linking art with science with the environment for cultural sustainability. New Engines of Growth: Five Roles for Arts, Design and Culture (NGA, 2010) presents the importance of art and creativity education in K12 as a driver to produce students who will be better prepared in the workforce. They also predict that art, culture and design will form creative knowledge clusters that can catalyze cultural districts and initiate community revitalization. Designing design education to nurture imagination across broad bands of population strengthens the collaborative culture of communities with direct affinities to specific places and specific schools.

Design is a dynamic process. It was first recorded as a verb in 1548 in written citation. Merriam-Webster (1993: 343). Forty years later it appeared as a noun. Merriam-Webster (1993: 343). As a verb or integrative process, and as a noun- a product, system or environment, design by people is human intent. Designers move thought into action. Architecture and the products of design practices can be seen as constructed ideas.

“Everyone designs who devises courses of action aimed at changing existing situations into preferred ones.” Herbert A. Simon, pioneer of computer science and artificial intelligence

In 1969, Buckminster Fuller understood design as the creation of things, industries and the universe as a whole. His definition of design stressed an ever present, underlying sense of order, a cohesive “wholeness” and the presence of intelligent thinking. With his “anticipatory design”, he also understood the significance of design for a humane, sustainable future. In 1963, Buckminster Fuller coined the term ‘Design Science’.

Design Science…”the effective application of the principles of science to the conscious design of our total environment in order to help make the Earth’s finite resources meet the needs of all humanity without disrupting the ecological processes of the planet.” Buckminster Fuller

NEXT GENERATION SCIENCE STANDARDS
Bundling the NGSS
NEXT Generation StoryLines

With the appearance of The Next Generation Science Standards, the study of design and the interdependence of engineering, technology, and science now take their place in the curriculum of American K-12 science education. The addition marks a major stride in the efforts of the nation’s scientific community to better explain and extend what is meant by inquiry in science. Placed in context of the education reform initiatives that began with the launch of the Russian Satellite Sputnik and continue with Project 2061, the new Engineering, Technology, and Applications of Science (ETS) standards emerge from the belief that students should not only learn how scientific knowledge is developed and acquired, but they must also learn how science is utilized, “in particular through the engineering design process.”

From kindergarten through grade twelve, students will now study the processes engineers use to define problems, test their solutions, and optimize their designs. Equally important, the study of engineering design brings new design pedagogies into the classroom, focusing attention on creativity, innovation, and engagement with “fail fast” 2 strategies that reframe failure as iteration and allow students to thrive. Reframing Failure as Iteration Allows Students to Thrive