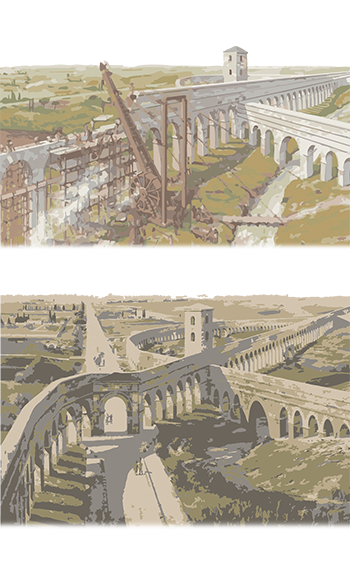 During the fourth century B.C., Roman forces organized a period of expansion and dominance unrivaled in Western History. Romans created and contributed to many of our current amenities. At the time, and for years to come, this was the best-connected empire the world had ever seen.

Romans introduced universal coins that could be used across the towns. They engineered the movement of water using gravity from springs in the hillsides through the country into the cities with aqueducts built of stone. Romans enjoyed plumbing and sanitation with running water and drainage inside homes, civic buildings, and baths. Their Hypocaust system, or underfloor heating, warmed homes with hot air movement pumped under the houses. They increased towns, building on Greek City-states and creating new ones. They established Latin as the universal language, created the first stone newspaper, and published codexes, or hand scribed texts leather-bound between two covers. They fortified the empire with forts and walls. Hadrians Wall in northern Scotland, built-in 6 years, ran 4.5 meters high, 73 miles long, and had 80 castles, 16 forts, and 160 turrets. Julius Caesar adopted earlier calendars into a 365-day calendar with 12 months, adding a leap year every 4 years to catch up with the extra ¼ day a year. This calendar was used for 1500 years until amendments were made by the Gregorian Calendar(which we use today). They instituted branding and trademarks of products and services.

From Augustus to Hadrian, Diocletian to Constantine, the Romans enjoyed self-rule for many centuries forming a civilization whose order and architecture have continued to influence contemporary urban cultures worldwide.

Activity 1 – The Oldest Book on Architecture

The basis for much of today’s knowledge of Roman Architecture is the writing of Marcus Vitruvius Pollio from the 1st century A.D. His Ten Books on Architecture set down the rules and procedures for creating an architecture of value. It is the oldest surviving ancient treatise on architecture; a copy preserved in the British Museum in London dates from the Carolingian period of the 9th century.

Vitruvius’s Books address the architect’s education as versed in substance and shadow, or practice and theory as being interrelated. He explains that architects must be equipped in both theory and practice. His definition of architecture is the combination of Firmitas(or Strength), Utilitas (or Function), and Venustas (or Beauty). This definition has been challenged by many cultures and many times, but still exists today as an integration of aesthetics, function, and accommodation. Vitruvius wrote of the need to educate an architect in many subjects, including philosophy, mathematics, arithmetic, music, astrology, medicine, and history. He further explains that architecture depends on Order, Arrangement, Eurythmy, Symmetry, Propriety and Economy, and all considered with reflection and innovation. He writes of three departments of architecture- the art of building constructing public spaces and buildings and private structures, the making of time pieces, and the construction of machinery. He details at length how to choose healthy locations for cities, create walled defenses, organize streets, place temples, connect public spaces, and key materials for construction.

The book, discovered by the Medici Family in the 14th century, became the center of Renaissance architectural theory and initiated a resurgence of the classical language as a universal architecture up to and through the Industrial Revolution. Write a paragraph about one of the Ten Books.

Activity 2 – All Roads Lead to Rome

Beginning in the fourth century B.C., Roman forces expanded a dominance unrivaled in Western History. Their armies rapidly constructed a safety barrier around its seven hills, securing the Italian peninsula. The forum, or downtown, became the center of all things Roman. “All roads lead to Rome” made it the most magnificent city globally. Giant amphitheaters, arenas, basilicas, and circuses expanded a dense city fabric with marketplaces, forums, governmental buildings, baths, and libraries. Each building featured a central interior connected to one or more exterior spaces of the city, linking the interior with external public life. Romans built a city as interconnected spaces linking topography with the streetscape, public space, and public interiors at large scales.

Explore the ROMAN FORUM. Find the The Via Sacra (Sacred Way), Temple of Vesta, Temple of Saturn, Temple of Castor and Pollux, the Curia (Senate House), the Rostra, the Tabularium (Record Office), the Regia, the Basilica Aemilia, the Basilica Julia, the Temple of Julius Caesar on the reconstructed forum; Identify which ones were Religious, Political, Administrative, Economic.

Draw the Roman Forum in its glory and in its existing state. 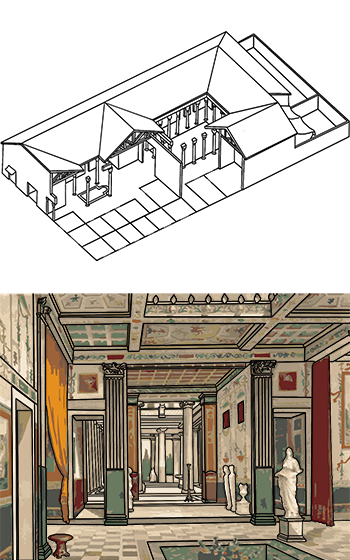 Vitruvius describes the Roman House in his Ten Books On Architecture. A front door centered between two rooms opens on-axis into an atrium open to the sky with an impluvium, or water collecting and reflecting pool. Walking around the sunlit cooling pool, one passes between rooms through a threshold to a sunny garden, surrounded by a colonnaded or peristyle court. The open and closed sequencing of rooms with transitions between inside and outside moves cooling air and light and shaded areas throughout the house. Main rooms feature beautiful mosaic tiles and handpainted painted frescoes, in interiors complete with a painted base, chair rail or wainscot, fresco, or painting area topped by an ornamental frieze. The dining room features a wooden, gridded ceiling with starry blue panels replicating the night skies. Clay tiles protect the roofs. The spaces attached to this axial procession are carefully arranged for their private and public functions, revealing the Roman interest in the propriety and function of interior and exterior spaces. Pompeii, a Roman town under the Republic, entirely buried by the eruption of Mt. Vesuvius in 79 A.D, and re-discovered in 1748, shares many of these details of Roman Life in its excavated buildings and streets. Look at the House of the Vetti in Pompeii, which shares many of these details of Roman Life in its excavated buildings and streets.

Draw a floor plan and interior elevation and label critical elements and spaces of a Roman House. Be sure to add frescoes to the walls of your Roman home! Add your Roman House to the Gallery! 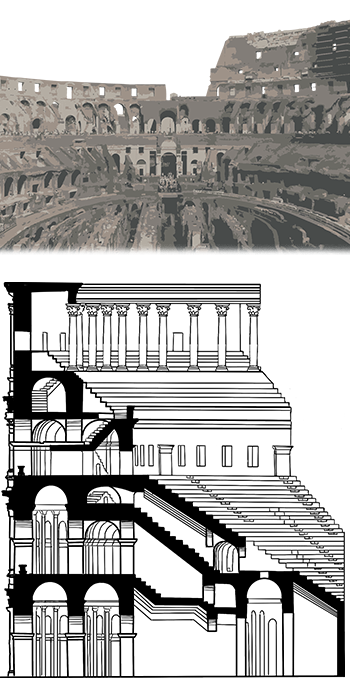 Roman architectural construction developed different and more versatile languages than the Greek temples’ prototype of stone columns and walls. Firstly, they added a lower order, the Tuscan, and a higher order, the Composite, to the Greek Doric, Ionic, and Corinthian columns. Next, Roman architects experimented with connecting columns with walls, stacking or ‘superimposing’ taller orders on smaller orders. Finally, introducing concrete construction, or opus reticulum, arches were constructed into vaults, groin vaults, and domes, creating new spatial experiences in interior volumes. For example, the Roman Coliseum uses superimposed columns as decorative (or non-structural) elements in arches. Built-in 80 A.D., the massive structure spans 617 feet by 511 feet and utilizes 80 arches to support and seat over 50,000 spectators for civic and sporting events. In the giant Baths of Caracalla, 212 A.D., the extensive ruins display the creative use of concrete in expressive domed and vaulted interiors. Draw or build the Coliseum showing both the arches and the superimposed columns.

Draw or build the Coliseum showing both the arches and the superimposed columns and upload it to the gallery!.

Rather than pursue the ideals of Greece’s unworldly perfection, the Romans chose to live in the present tense. Roman theatres differ from the Greek theater meditation on a backdrop of the natural world as they added a theater wall to focus on the liveliness of the actors playing themes and stories. In addition, extensive ruins of the Baths of Caracalla, 212 A.D., display the creative use of concrete in expressive domed and vaulted interiors that provided the citizens with solariums, mudrooms, steam rooms, hot water tubs, and more. The Circus Maximus in Rome, derived from Greek Hippodromes used for chariot races, was a u-shaped leveling of part of a hill. The Circus Maximus seated over 100,000 people and was four stories high. Circuses could be found throughout the territories ruled by the Roman Empire, including Jerusalem, Alexandria, and Constantinople.

Draw or build a Roman Theater, The Baths of Caracalla, or the Circus Maximus and them to the Gallery! 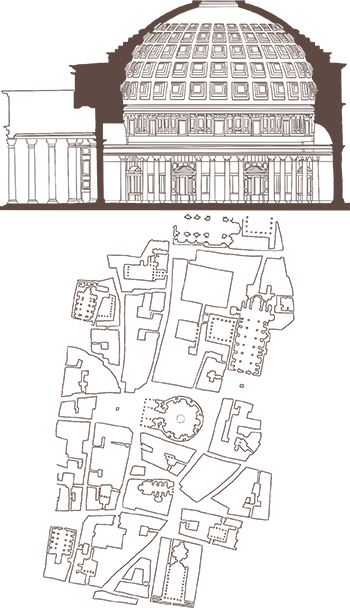 The Emporer Hadrian built the Pantheon, 118-128A.D., as a temple to all the gods. It is one of the most revered and timeless examples of Roman architecture. A 142-foot sphere can be inscribed in the space touching the floor, the six-meter walls, and the underside of the Oculus, or celestial eye, which opens the great dome to the outside, illuminating the interior with a bold stream of light. Niches in the wall make place for alters for the gods, with the seventh the open door for people to enter. Seven stepped circles support the concrete dome and its center oculus representing the seven days of the week. The coffered ceiling of twenty-eight tiers counts the days of the month in the Roman Calendar. The proportions of the golden rectangle set the front portico in plan and elevation. Pure geometry creates an architecture of time and space. Constructed of Egyptian granites, African colored, and Aegean white marbles, the Pantheon remains one of the most significant and best preserved Roman buildings.

Draw the plan and section of the Pantheon showing the interior geometry of the sphere and the golden mean in elevation. Upload it to the gallery!