The most used building material in the world is concrete. Concrete is a fantastic material that starts as fluid, malleable, and dries hard and strong. Read about concrete’s strength in compression. People mixed concrete throughout the centuries using different earth elements and water combinations. Concrete is 60-75% earth aggregates-sand, gravel, crushed stone, up to 8% air, 4-21% water, and 7-15% cement. The ingredients for concrete combine into a fluid that is easily poured and molded into any shape imaginable. In the 21st century, concrete factories collect the ingredients and drive the malleable fluid rotating the mixture to sites to pour into formwork. The fluidity of the mix and the timed delivery to pour it into set formwork for hardening are of the essence. Concrete can be quick to cure or take longer to solidify completely. After the pour, the fluid material sets, or ‘cures,’ into strong, solid forms. Different types of concrete have various periods of hardening or 'curing’ in walls, floors, stairs, foundations, buildings, roads, bridges, and dams. Read on to learn more about different applications and types of concrete throughout history and today!

Indigenous Nabatea traders in Syria and Jordan constructed floors, houses, and underground concrete cisterns as early as 6500BC. Around 3000BC, the Egyptians used mud mixed with straw to build dried bricks, creating the great Pyramids at Giza. The Chinese built concrete foundations and mortar in the Great Wall. By 600BC, the Romans rebuilt Greek City states, connecting new territories with roads and aqueducts; some of the Roman roads are still serving the public today! The Romans added volcanic ash to a mix of sand, rock, and rubble(gravel), causing it to harden quickly, and developed new structural forms of the arch, the vault, and the dome. In the middle ages, the concrete formulas disappeared until 1414, when people rediscovered manuscripts that recorded the technique for making pozzolan cement. In 1794, the discovery of hydraulic lime by an Englishman, John Smeaton, innovated the process further. In 1824 the ubiquitous Portland cement was introduced by Joseph Aspdin, who burned finely ground chalk and clay to remove carbon dioxide. Research and create a timeline of concrete. In the 19th century concrete was used the world over to create a multitude of new building types- airports, stadiums, skyscrapers. In 2010, the world’s tallest building, the Burj Khalifa, Dubai, was constructed mostly of reinforced concrete.
Research and create a Concrete TImeline with key structures throughout history!

As concrete continues to evolve as the world’s most used construction materials, several key buildings, and works by architects share unique accomplishments of experience, logic, structure, beauty, identity. Look at the work of Santiago Calatrava, Tadao Ando, Louis Kahn, and Luigi Nervi to see some of the many beautiful forms and expressions of concrete. From concrete domes, stadiums, airports to thin shell concrete forms, architects innovate with concrete and continue to do so today. Research concrete buildings. Sketch, draw, or Photograph concrete buildings to see how concrete can create beautiful forms. Or make a poster of concrete buildings that interest you. What would you like to make out of concrete? 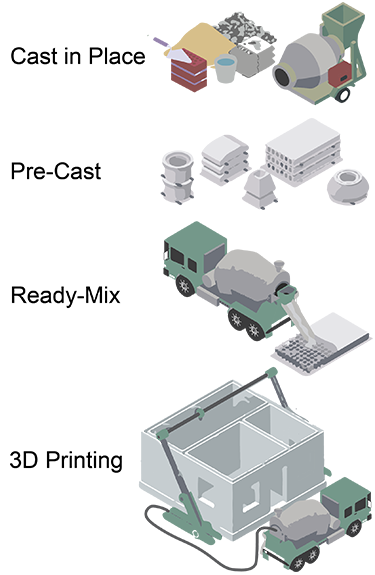 Some types of concrete used in architecture include ready-mixed or cast in place, pre-cast concrete, and new generation applications. Ready Mixed concrete or formed in place is prepared at local concrete factories and trucked to fill formwork on specific sites; this application represents almost 75% of all concrete used in construction today. Pre-Cast products are molded in factories and include concrete bricks and masonry units, paving stones, structural components, walls, floor and roof panels, and more. Concrete is strong in compression but weak in tensile strength. To add tensile abilities to concrete, engineers embed steel, iron, and fibers within the concrete to improve its performance. Tension capabilities in concrete are pre or post-tensioned, depending on structural needs. Pre-tensioned concrete is prepared in the factory and delivered to the site; post-tensioned concrete involves tightening after the pour. Tangents to structural concrete production are cement-based materials, including mortar, grout, and terrazzo. Additional concrete products include numerous aggregates and fibers and create countertops, siding, shingles, and tiles. Look at NEXT.cc Structure and Structural Systems to explore concrete use in construction. Make a poster of concrete buildings and products.

Surface cut or textured colored concrete is known as decorative concrete. When concrete is cut or scored, it creates patterns that last as long as the concrete lasts. Concretes with various additive pigments make a more harmonic drive or walk that matches the colors of the house or building. It can also be stamped and colored to appear like slate, stone, brick, etc. Find examples of decorative concrete in driveways and facades in your city and make a material quilt of the different colors and patterns.

Activity 5 – The Future of Concrete Construction

Engineers and architects innovate with new mixes of concretes for innovative surface and structural applications. Computer capabilities increase the application and advancement of concrete and its use in the architectural, art, and design world. Digital shapes can be rapidly modeled and then fabricated in automatic output centers. Read about the 1st 3D printed concrete digitally bridge. What do you imagine concrete will contribute to human life in the future? Make a poster of unique concrete forms and facades of buildings.