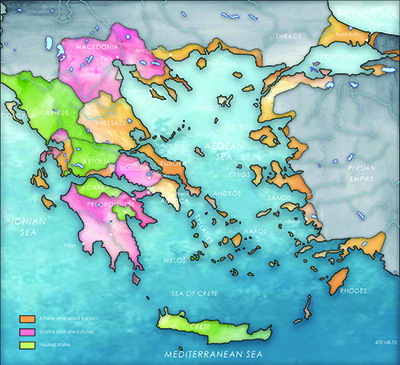 Classical architecture is the language of architecture brought to us by the Greeks and Romans. Its rules and canons form the most influential tradition for centuries in western human civilization with buildings being built today still reflecting its ideals. Drawing from the Egyptian and earlier civilizations in the regions surrounding the eastern Mediterranean Sea, the emergence of Greek Architecture coincides with economic growth and beginnings of democratic forms of government over individual city-states. Growth of these city-states began the evolution of key building types like the courtyard home(megaron), the library, the market place(stoa), and the theatre. The Classical Age (c. 450 B.C.) defined the image of modern man, ruled by law and moved by human intellect. A simple harmony of people and nature established the settings for buildings in cities facing the sea. These Greek city-states urbanized areas around the Mediterranean Sea. The Romans followed connecting all of the Greek city-states into an expansive Roman Empire that built Roman roads and cities as far west as Scotland and as far east as Asia and as far south as Northern Africa.

Activity 1 – The Oldest Book on Architecture

The basis for much of today’s knowledge of Greek and Roman Architecture is the writing of Marcus Vitruvius Pollio from the 1st century A.D. His Ten Books on Architecture set down the rules and procedures for creating an architecture of value. It is the only surviving ancient treatise on architecture; the oldest copy dates from the Carolingian period of the 9th century and is located in the British Museum in London. Vitruvius’s Ten Books addressed the education of the architect as versed in both substance and the shadow. He explains what architects must know to become an architect. Vitruvius spoke of Firmitas (or Strength), Utilitas (or Function), and Venustas (or Beauty) as defining qualities of architecture. He wrote of the need to educate an architect in many fields including philosophy, mathematics, arithmetic, music, astrology, medicine, and history. This book, discovered by the Medici Family in the 14th center would be the center of Renaissance architectural theory and a resurgence of the classical language as a universal language of architecture up to and through the Industrial Revolution.

Write a paragraph about one of the Ten Books.

Greek architecture is the flowering of geometry. R.W. Emerson

The **Classical Language of Architecture* is a system of parts that relate together to create a unified whole. Each part is in relationship to all of the other parts and each part is created in proportion to the other parts. These relationships, tested in Greek Temples, expanded upon by the Romans, were codified or refined in the Renaissance by architects and theoreticians. The parts of the classical language are the column and its related parts; the beam or entablature and its related parts, and the Cornice or ‘crown’ and its related parts. The beam and entablature system is a trabeated system of architecture or post and lintel structure system. A dividing stick was used to define the geometry of the small parts to the overall. The height of the column is based on its circumference at the base. The height of the entablature and its architrave, frieze, and cornice are all based on diminutions of the base module. As buildings moved from wood construction to stone, the Greeks created 3 orders- the Doric (from the Dorians), the Ionic (from Ionia) and the Corinthian (from Corinth). The Romans expanded the three orders to include the most basic, the Tuscan, and the most ornate, the Composite which incorporated both the volute of the Ionic with the acanthus leaves of the Corinthian. Greek columns are structural. Romans used free-standing columns as well as ornamental embedded columns in and on the wall. Look at NEXT.cc’s Column Journey.

Draw three orders with their base circles stacked to establish their height.

Activity 3 – Anthropomorphism and the Orders

Greek Architecture contributed three orders to the classical language: Doric, Ionic, and Corinthian. The Doric order is thought to have come from the Dorians, the Ionic from the Ionians in Turkey, and the Corinthian from the isle of Corinth. Each order was endowed with the human form. The base represented the feet, the shaft the human torso, and the capital the human head. The Doric represented the strength and solidity of the male figure. The Ionic, slightly taller, represented both male and female, or an androgynous character; its rams horn connected by a string of eggs and darts represented simultaneity of male and female. The tallest Greek order, the Corinthian, is thought to represent a young maiden. Its capital has acanthus leaves cascading in three levels. Greek orders did not have separate bases for their columns. The columns rose in shafts of carved drums that sat perfectly one on top of the other. The columns rose straight for the first third, and then slightly enlarged and then diminished in diameter at the necking or echinus to hold the capital. These adjustments made the columns appear straight when looking up and in perspective.

Greek columns were structural, supporting the weight of the stone architraves and then the weight of the cross beams of the roof. The Romans added two more orders. The oldest and most primitive, Tuscan, came from the region known as Tuscany, and is the simplest of all orders; it originated in wood, rather than stones in villas in the countryside. The Romans also added the most ornate order, the Composite. The Composite Order was the tallest and combined the Ionic and the Corinthian capitals using both the ram’s scrolls and the egg and dart echinus.

Make a drawing of the five orders, from the shortest to the tallest. Sir John Summerson, in his book The Classical Language, defines orders as the three parts of the trabeated structural system- the column, the architrave or cross beam and the entablature.

Draw and label these three parts of the orders. 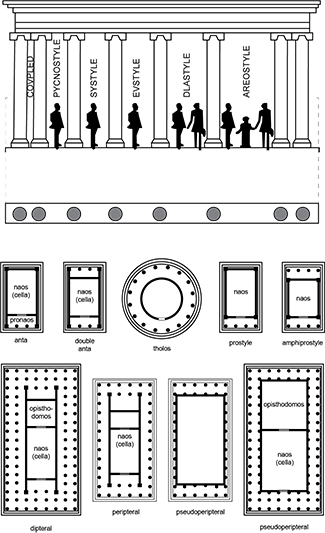 In addition to the size, shape, ornamentation of the orders, stone craftsmen measured the distance between columns using the same base modular or diameter of the column. The closest intercolumniation have room for one person to stand between two columns. As the columns moved further apart by half and whole circles, a more comfortable opening appeared. The change in expression and experience of column spacing set the presence of classical facades from militaristic to inviting and open. Intercolumniation is measured by spacing one, two, three, or four triglyphs between columns called monotriglyphic, di-triglyphic, tri-triglyphic, or tetra-triglyphic.

Draw the five intercolumniations in plan and elevation. 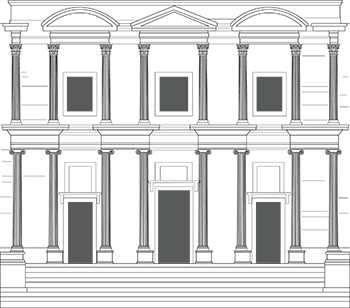 Stone carvers building multiple story facades combined the orders by stacking the taller orders upon the shorter orders in what is called superimposition. The library at Ephesus is a good example of the stacking of the Corinthian on top of the Ionic order. The Roman coliseum is an early example of the engaged column in an arched structural wall that uses the Doric order on the bottom, stacking first the Ionic, then the Corinthian and a first use of the Composite order on the 4th layer. Draw a facade that stacks the orders.