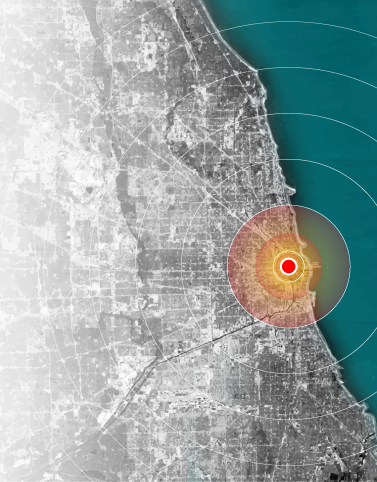 What is a green city? While the Emerald City in The Wizard of OZ is ‘colored’ green, it is not the deeper meaning of green for today’s growing cities. With the world’s population moving quickly into urban areas, governments are becoming more and more aware of the importance of creating healthy environments with healthy relationships with local regions for sustaining growth. Defining a healthy city is changing as perceptions and understanding of local, global and international aspects of weather, economy, culture and technology inform each other. Green Cities are cities that connect people to the regions, economies, cultures and natural systems of their location. Termed ‘regenerative cities’, by Professor, filmmaker and global consultant, Herbert Girardet, (2010 World Future Council Report) these urban areas encourage educational opportunities for people to participate in changing to renewable energy resources and more sustainable lifestyles choices of production, consumption, transportation, and construction. These changes require a long term vision for urban areas that strengthen identity, economy and local production of goods and energy sources.

L. Frank Baum authored The Wonderful Wizard of Oz as a fantasy adventure of a young girl from Kansas (Dorothy) whirled away in a tornado to a mysterious land of good and bad witches. To arrive back home, Dorothy was encouraged to travel to the Emerald City to see the Great OZ, who was the only one who could help her. With her dog, Toto, Dorothy set off on her adventure only to meet three amazing characters- the Tin Man without a heart, The Cowardly Lion without bravery and the Scarecrow without a brain. Throughout her adventure, she was besieged and befriended by witches. The witches to the North and South were good witches; the witches to the east and west were bad witches. Much has been made of Baum’s Wizard of Oz as political symbols relating to the times. Factories (Emerald City), farmers(Scarecrow), underpaid workers(Tin Man), money (Dorothy’s silver shoes) and nature (Lion) collide on a path to riches (the yellow brick road). The good (north and south witches) serve as guides, and the bad witches (east and west) challenge and provoke. While Baum in the end revealed that the story was just a children’s fantasy, the symbols and allegories continue to have a life of their own. That said, what fantasy adventure would tell the tale of today’s Green City? What is a Green City today? Who would the characters in the story represent? How would a city of the future be different than the cities of today? 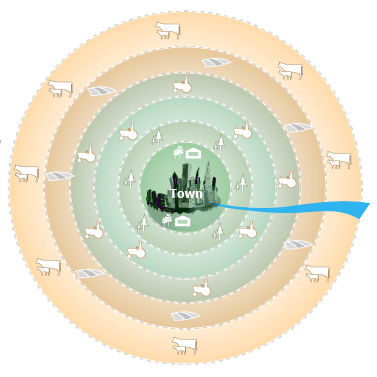 Nomads who traveled across land foraging for water and food began to gather in settlements with the advent of farming. With farming came a more stable food supply than hunting drawing more people. We call the early cities agrarian cities supplying populations with food from local farms. Watch World Populations and see how people moved into certain areas and then departed due to deprivation of water, food or onset of disease. Look at the US & World Population Clock. Watch the revised version of World Population and learn about issues facing humans and the environment. Take a look at Khan Academies History of Agrarian Civilizations to learn how production of food led to higher levels of organizations in populations. Cities created major roads connected to market plazas to facilitate flow of food and goods. Make a diagram of an agrarian city showing fields for growing food and raising animals, fruit orchards, houses, shops, important buildings, docks, bridges and where needed, walls. 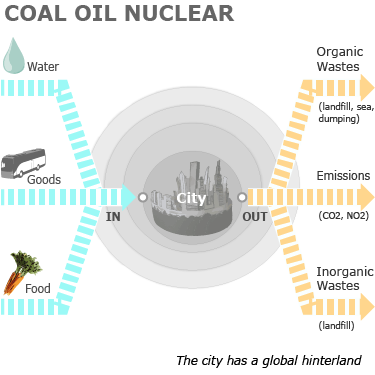 Post-industrial cities are reliant on fossil fuel sources and imported food and water and supplies, created transportation systems that invaded regions and expanded the footprint of cities. Urban sprawl and expansion results in the need to move supplies further afield to reach less dense populations. The loss of open countryside, overlooked in the 20th century, is becoming understood as a threat to sustaining the ecology of cities who need local water, local food, and local clean air. Our current process of urbanization, or deforestation and desolation, depletes natural cycles and systems of biodiversity beyond our understanding. Cities that emulate nature’s ecosystems move from a linear “in” and “out” flow to a more self-sufficient metabolism as they produce, consume and reuse their own waste. Make a diagram of your city as a linear system. 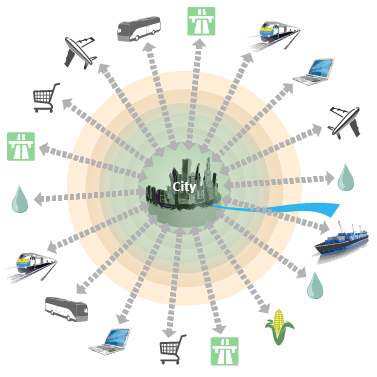 Since the beginning of urbanization, cities produced agriculture to sustain populations. Farming and local products were produced and sold in the market, feeding the population. Rivers served as liquid highways floating spices and supplies from further away. When cities developed railroads that could carry many times more supplies and food products, and then invented refrigerated cars, they began to import meat, already slaughtered, and vegetables, already gathered. Cities disconnected from surrounding farms, and local provisions and merchants purchased supplies from other towns further away based on market values. Cities grew (and are growing) exponentially demanding increased supplies and creating a linear metabolism of food in and garbage out. Today food is transported via rails, ship containers, refrigerated trucks, and refrigerated planes. This linear metabolism consumes immense amounts of fossil fuel, non -renewable energy and structures airports, shipyards, highways and big box distribution centers that configure movement of goods in and sometimes out of urban areas. Traffic, congestion, pollution and environmental degradation of transported food industry and imported goods renders post-industrial cities till reliant on fossil fuel sources of energy as “Petropolis Cities”. Make a diagram of the import systems for goods into a Petropolis city. 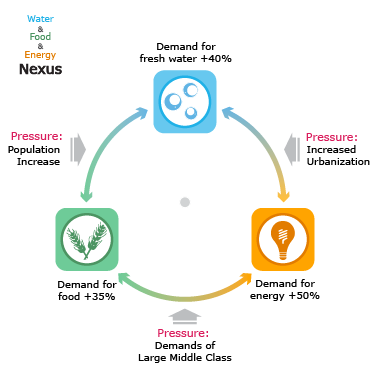 Water, food and energy are connected. They are all basic needs of living organisms. There is a finite amount of water on earth and that water is needed to sustain life and grow food. The United Nations Water, Food, Energy Nexus reports that 70% of water use is in food production and food production, and supply consumes 30% of world energy. As the world population grows, more food and water is needed. As more people move into cities more food, water and supplies are needed continuing to pressure the water, energy, food nexus. If one part of the world has food and clean water and supplies, shouldn’t every part? Watch the food, energy water NEXUS and make a diagram of the interrelationship between the three. 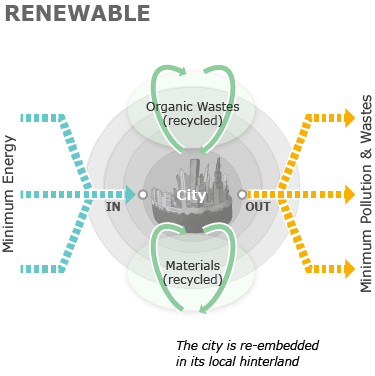 Green Cities are cities that strive for a circular metabolism. Green cities are designed to function in ways analogous to nature. As nature produces its own food and consumes its own wastes, cities need to lessen their carbon footprint by increasing local, year-round food production. They need to reduce garbage in landfills by composting, recycling and reusing materials. Green cities reconnect their residents to city hinterlands establishing a sense of place and stewardship of care. Cities support the creation of local food production and local products, reducing reliance on on imports. A circular metabolism limits city size and protects the surrounding countryside from suburban sprawl. 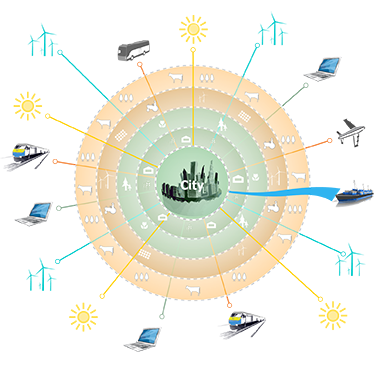 Cities now cover 3-4 percent of the earth’s land surface housing over 50% of the world’s population. Cities use 80% of the earth’s resources discharging solid, liquid and gaseous waste into the environment. Green cities are cities whose policies strategize systemic change to nurture and develop positive symbiotic relationships regionally, nationally and internationally. Green cities acknowledge connections with and impacts on other urban areas and communities and the larger planet ecosystems as a whole. For example, water, sewage, food and energy schemes should be coordinated together rather than developed separately. Green Cities are regenerative cities in that they return topsoil and clean air with green spaces, trees, and natural filtration spaces. Green cities grow their own food and manage their own wastes. Green cities localize in producing unique and viable products of their regions. Green cities organize themselves into a circular metabolism by connecting people with nature and by assimilating urban systems to ecosystems. Green Cities are also healthy cities. Diagram your vision of a green city!