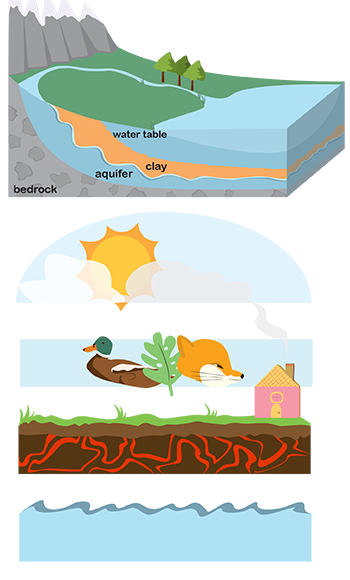 Second to air, water is the source of life. On earth, water is in constant motion moving over, on and through the atmosphere, lithosphere, geosphere, and hydrosphere. The energy of the sun heats our water and keeps water in constant motion. This moving water is a source of renewable energy. Early peoples used flowing rivers to turn a water mill to grind their harvested grains. The Romans engineered major aqueducts to supply their city of over 1 million inhabitants. Originally rivers and lakes provided direct water sources for agriculture or urban access to water. Today the energy of flowing water uses mechanical energy to spin the rotors of turbines to generators to create energy. The world has three sizes of hydro plants: micro (generating <100kW), small (generating between 100kW and 30MW), and large (generating <30 MW). Now their constant flows create the largest renewable energy source in the world! Once constructed, hydropower provides an abundant, low-cost source of power that can store gained power for use over time. Today though, there is a growing understanding that the large dam projects have a significant impact on the worlds’ rivers changing the ecosystems through flooding above the dam which disrupts wildlife habitats, blocks fish passages, and even covers complete communities. Hydro plants provide almost a fifth of the world’s renewable energy. 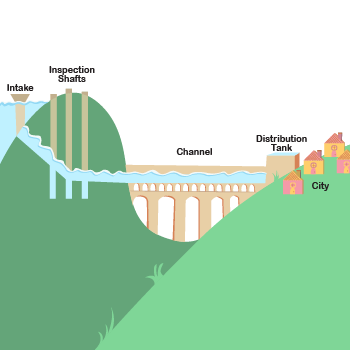 Romans understood the necessity of water for urbanizing growing populations. Building a system of open trenches, ducts, and pipes, they moved water from lakes and higher elevations into the neighborhoods of Rome. Their first principle was gravitational flow with a slope of 1 foot per mile or an approximate grade of 0.02%. This meant that aqueducts often traveled indirect paths from the high stream heads and lakes. When this process met obstacles, they built underground tunnels zigzagging their way from mountain pools and streams to the city. If this was not possible, they used the techniques of bridging and siphoning. Bridging is a technique that carries water between mountains over valleys rather than continuing to tunnel underground. Siphoning required non-earth material fabrication that can move water from a high level to a low level or vice versa using suction. Draw a map of the main Roman Aqueducts and where they traveled into Rome. 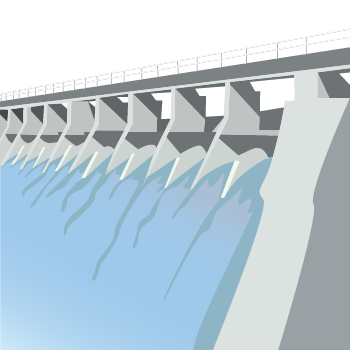 People build dams across rivers to store water. This stored water can be used for recreation, fisheries, to increase access to water in periods of low rain, to control flooding, and to generate electric power. By raising the level of water upstream (behind the dam), the water can be diverted into irrigation canals, or controlled to increase the hydraulic head or difference in altitude between the reservoir and the river below. The creation of storage and altitude change generates electricity. Run of the river dams and storage dams create large reservoirs behind the dam and regulate the flow of the water down the river. A ‘run of the river’ dam allows water to pass at certain eights while storage dames mechanically control water release. Research the largest dams in the world and create a chart of the date they were built, the location, the amount of water held, and the amount of electricity generated. Note that the largest dams to date are in China. Draw and diagram the parts of a major river dam in the world. 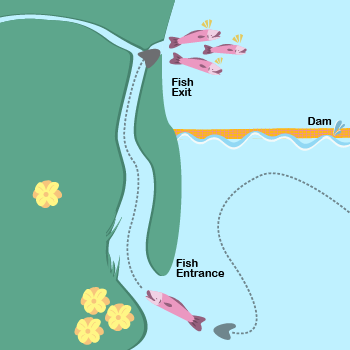 Partial diversions or partial flow dams are dams that offer attempts at regulating flooding and soil erosion with a partial impairment to the natural flow of the river. Draw and diagram a simple partial diversion dam and label the key parts. 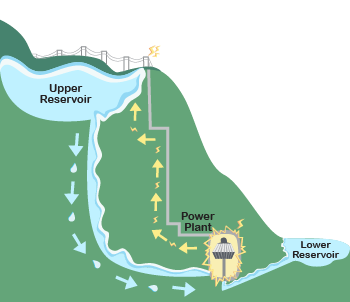 In a pumped storage dam, the gravitational potential weight of water is stored in small reservoirs and pumped to higher elevation and released as electricity during high energy demands. Although The pumping process makes uses energy, yet the system makes income by selling electricity during periods of peak demand when electricity prices are highest. Pumped storage can make use of smaller spaces in altitude shifts with less damage to ecosystems and can draw from other renewable sources to produce energy for pumping the water up to the higher reservoirs. Pumped storage represents 95% of the worlds’ energy storage currently. Draw and diagram the parts of a pumped reservoir. 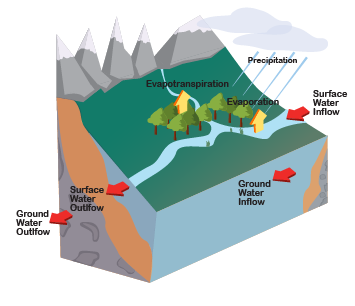 A Hydrological Budget is a detailed look at the quantity, quality, and accessibility of water in a watershed area. It involves measuring and testing the inflow and outflow of water in the hydrologic cycle as it comes from the atmosphere, filters or runs off through the geography and topography, and is absorbed or finds its way to streams, rivers, or low-lying areas. Draw a diagram of a hydrological budget that includes a dam. What changes in the budget when a dam is added? Make a comparison on your drawings of the positive and negative impacts. 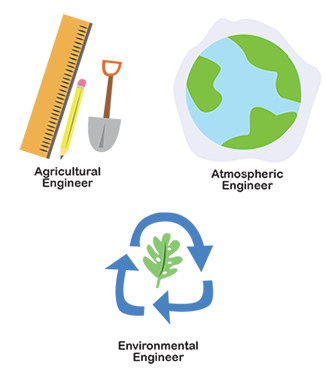 Scientists and engineers and many related practices study water cycles, water-related problems, and collect information on the quantity of water available for populations; the quality of water for human use; and the availability of water around the world. Work as a historical socio hydrologist and study how water engineering in the past supported growth and decline of civilizations and how it might predict human migration of populations in the future. Take a look at Hydrology as a Creative Career PPT. Make a poster about a hydrology career that interests you and the steps that you can take to become a Hydrology Engineer.