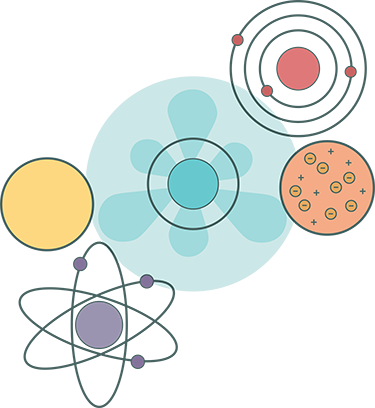 We are made of stars. *Carl Sagan

Activity 1 – Parts of an Atom 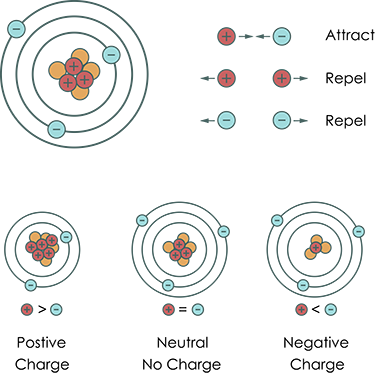 The building blocks of matter are atoms, but atoms are made of even smaller parts. The defining parts of all atoms are the nucleus, protons, electrons, and neutrons. Most of the atom’s weight is in the nucleus, which contains the protons and neutrons. The electrons move around the nucleus in…empty space. Protons carry a positive (+) charge. Electrons carry a negative (-) charge. Neutrons have no charge. Atoms are neutral; they have the same number of protons and electrons. Through chemical change, an atom can lose or gain electrons, making it an electrically charged particle called an **ion. If more electrons are present than protons, the object will have a **negative* charge. More protons than electrons mean that the object has a positive charge. If the number of protons and number of electrons is equal, the object has a neutral charge. Some chemical changes are dangerous. For example, sodium metal, made up of neutral sodium atoms, bursts into flame when it comes into contact with water.

What the world is made of has always fascinated people. From the very small to the very large, size and scale have fascinated and captivated every civilization. Today we are still fascinated as we look at theories of the universe as encompassing everything large, such as Einstein’s theory of relativity, or small, such as Quantum Physics, or scientific theories that attempt to reconcile the two. Watch Powers of Ten by Rae and Charles Eames to and travel between the two scales, or take a look at Scales of the Universe or Universal Scale to see how connected everything really is and to better visualize the size of things that constitute our world.

Look at this interactive history of the periodic table. Find out what elements were known in year 1, or 400, or 800, 1200, 1600, 1800, and 2020. Gold, Sulfur, and carbon were elements recognized in ancient times. By the early 19th century, 47 items had been discovered. Alexandre-Emile Béguyer de Chancourtois was the first to organize the elements by atomic weight in 1862. The Russian Chemist, Dmitri Mendeleev (1834-1907), organized the parts by atomic mass but went further. He discovered that certain elements had similar properties. He arranged the elements into eight groups or columns with room for yet to be found elements. Read about Mendeleev’s discoveries.

As elements were found, the Periodic Table was created, and items were listed by the atomic number. The current table, which now includes 218 elements, continues to be based on an Atomic number. In the table, the elements are arranged into rows, called periods, in order of increasing number, and vertical columns, called groups, where the elements have similar properties. The metal elements are found on the left-hand side, and the non-metal elements are on the right. As you can see in the periodic table and in the photographic gallery, Hydrogen, the most abundant element in the universe is number 1; it has one proton per atom. Looking at the sun, we see a very bright light! We are actually looking mostly at Hydrogen. Hydrogen, while primarily found in water on earth, separates from its electrons with the sun’s heat and fuses into one helium atom. Lithium, the third element, is a lightweight metal. When did the number of known elements increase the most? Draw the periodic table as it exists today.