Nuclear energy provides two forms of energy production: fission or splitting apart of atoms and fusion or coming together of atoms. Nuclear power uses the energy in the nucleus, or core, of the atom. The enormous amount of energy that holds the nucleus together is known as the “Strong Force.” The nuclei of atoms release tremendous amounts of energy by joining together or splitting them apart. The sun’s internal heat fuses hydrogen into helium atoms and, in turn, energizes our world with heat, light, and photosynthetic energy. In our earth, uranium deposits nuclear from two billion years ago in West Africa in an area known as Oklo operated ‘naturally’ with rainwater cooling their heat from fission. Originally reactors were developed to move large naval ships and to power submarines underwater; these types of reactors generate 85% of the world’s nuclear electricity today using a pressurized (PWR) water reactor at over 300°C as the cooling/heat transfer. Another unit then provides the transfer to steam and electricity. The newer plants use a boiling water reactor (BWR) to make steam above the reactor core using steel pressure tubes. Yet another type uses ‘heavy water’ or water with deuterium atoms. Power plants are a 20th-century form of electricity production that uses nuclear fission of the radioactive element uranium to generate electricity. Nuclear Reactions such as fission require careful monitoring to sustain and control the chain reaction at a stable temperature.

Activity 1 – History of the Nuclear Reactor

Greek philosophers thought that all matter was composed of invisible particles called atoms. The word comes from the Greek word, atomos, meaning indivisible. It wasn’t until the 18th and 19th centuries that scientists revised the concept based on their experiments. Look at the ATOM Journey to see different contributions to the atomic structure by scientists Dalton, Thomson, Nagaoka, Rutherford, Bohr, de Broglie, Schrödinger, and Chadwick. Physicists knew the atom contained large quantities of energy. The British New Zealander, Ernest Rutherford. became known as the father of nuclear science because of his contribution to the theory of atomic structure as having a dense charged nucleus surrounded by a field of orbiting electrons. He wrote: *If it were ever possible to control at will the rate of disintegration of the radioactive elements, an enormous amount of energy could be obtained from a small amount of matter. Enrico Fermi (1901-1954), an Italian Physicist working on nuclear transformation, artificial radioactivity produced by neutrons, and energy releases brought about by slow neutrons tested atomic fission in a controlled reaction. After receiving a Nobel Prize in Physics in 1938, he escaped World War II in Italy and moved to America. Fermi developed the first nuclear reactor (Chicago Pile-1) at what is known as Fermi Lab. He worked on the secret Manhattan Project, which developed the atomic bomb that, when deployed, brought about the end of World War II. In a few decades, the power of Nuclear energy began to provide energy. Watch the *Atomic heritage Foundation, Chicago Pile I *. Make a history timeline of Controlling Nuclear Chain Reactions.

Activity 2 – Nuclear energy Around the World

Nuclear Power Plants produce around 10% of the world’s electricity in 2020 with an anticipated increase to 2050. With over 400 nuclear power plants in thirty countries, some nuclear power plants have failed, others have been closed, yet other countries are building new ones. Currently, the United States leads with over 100 nuclear reactors producing approximately 20% of its energy. As a country, France is 70% fueled by atomic energy, having built carbon neutral reactors as early as the 1970 oil crisis; they also sell electricity to other countries. With other nonrenewable energy sources that do not require mining and dangerous consequences, France plans to reduce nuclear energy use by 50% by 2030. Explore the Global Nuclear World ap and locate atomic energy plants in your country. 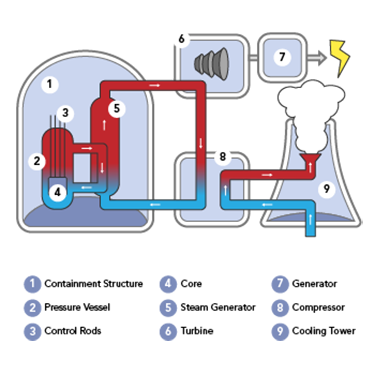 Activity 3 How a Nuclear Energy Plant works A nuclear power plant is a series of machines that splits atoms(uranium atoms usually in the form of fuel rods), which generate heat and create steam, which in turn creates electricity. When uranium atoms split, the splitting starts a chain reaction; this reaction releases heat, which warms the cooling agent, which must be regulated to maintain the chain reaction. This cooling agent, heated by the atomic fission, produces steam, which drives generators that create electricity. The key components to most reactors include the fuel, the moderator, the control rods, the coolant, pressure tubes, steam generator, and the containment structure. Read about the components from the World Nuclear Association. Draw and label the main parts of a Nuclear Power Plant.

Sometimes nuclear plants fail, causing significant fall out of radioactive elements. Radioactive elements spew into the air covering large areas of land with deadly consequences for inhabitants and ecosystems. Exposure to radiation for periods can cause burns, cancer, infant mortality, and damage to everything living. The failure of reactors involves human error. The three most significant nuclear disasters in which atomic reactors, burned and lost control include the Three Mile Island (Pennsylvania, United States, 1979), Chernobyl (Russia, 1986), and Fukushima (Japan 2011). While Three Mile Island has been successfully closed, the Chernobyl clean up, and removal of radiative material continue until 2065. The Fukushima plant is still leaking tainted water and damaging sea life in the ocean. Japan is in the process of remediating the technical, water containment, economic and legal challenges. Nuclear plants accrue waste in the mining of uranium and in the removal of radioactive waste from the fission process. Nuclear reactors are considered a clean form of production of electricity in that since their inception they maintain that they have taken care of their waste. The problem is in the failed plants that take years to remove the radioactive damage. Read the nuclear fuel Cycle Overview to find where waste occurs on the process. Balancing the future of nuclear energy with risks involved must always be considered. What do you think? Make a chart of the pro and cons of making electricity from nuclear plants.

While nuclear energy provides immense amounts of energy for electricity for countries, since World War II, it is known that it can also create weapons of mass destruction. Post World War II, the five states that had stockpiled weapons (United States, Russia, Japan, - created The Nuclear Non-Proliferation Treaty (NPT) in 1968. In 1995 it was extended and was up for review in 2020. This treaty allows countries peaceful use of nuclear fuel, as they work to limit the spread of atomic weapons in other countries and to disarm their country’s supply of nuclear weapons. The International Atomic Energy Agency, also created after World War II (1957), supports the contribution of atomic energy ‘to peace, health, and prosperity throughout the world’ and works to supervise and control its use not to include military purpose. The United Nations also supports nuclear disarmament and supports the development of atomic weapon-free zones. Countries like France plan and Germany plan on reducing their reliance on nuclear energy over time as they increase the use of other renewable energy sources to produce electricity. Look at the Alternative Energies Journey and make a chart of different possibilities of alternative energies for the future.