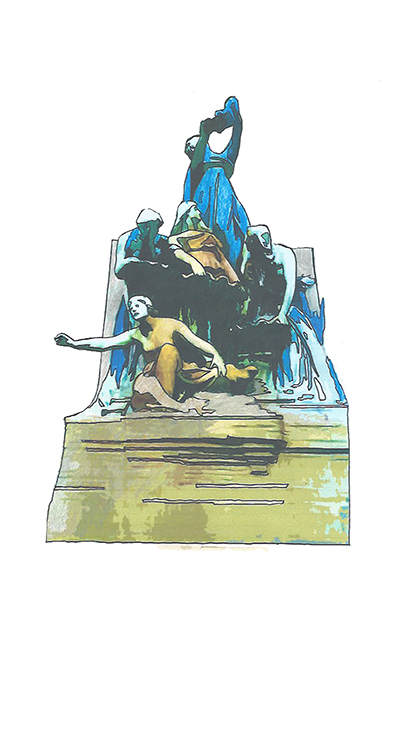 Water is the second most precious human need after air to breathe. Sources of water have always been places sought by people. The oasis in the desert, the bubbling brook, the sparkling spring, the lazy river—all are welcome sights for travelers, migrants, and foragers seeking places to settle. The word fountain comes from Latin ‘fons’ or ‘fontis,’ which refers to source or spring. In Roman times, fountains connected directly to springs. Constructed aqueducts brought water for drinking, washing, and bathing to the Roman people in cities all over the Mediterranean and Asia and Africa. These fountains operated by gravity, using the nature of water to flow toward the lowest point. When the needs for water in villages and towns were met, celebratory and commemorative water fountains were sculpted. Like the drains from Greek Temples, water spouts featured animals and even human sculptures. Ceremonial fountains were grand edifices that explored the many pleasures of water. Moorish and Muslim fountains replicated ideas of the gardens of paradise. The French King, Louis XIV, created a Chateau with over 350 fountains of mythological figures declaring power over the forces of nature. At the end of the 19th century, the invention of running water inside of our homes answered all of our needs for drinking, washing, and bathing, yet fountains continued to be built for decoration, as elements of public spaces, and in commemoration and celebration. Famous fountains around the world honor human achievement and past civilizations. Today, cities build splash pads and water playgrounds and waterparks. Musical fountains combine water, sound, and colored lights in rhythmic displays. Fascinated with fountains? Get wet!

Activity 1 – How do Fountains Work? 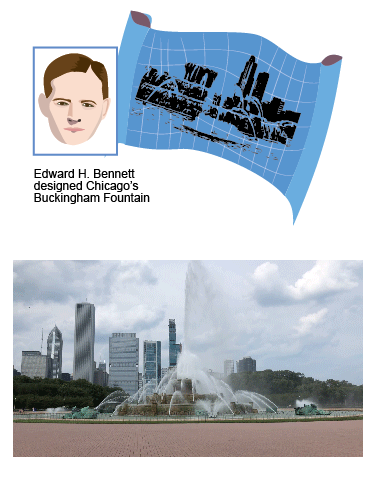 Early fountains depended on gravity or the flow of water from high lakes and reservoirs to lower points. Roman aqueducts carried water over long distances sloping down from a source to deliver water to homes and buildings by underground lead pipes. Aqueducts are an example of gravity based engineering. With the invention of machines with gears, pumps could move the [simple machine] of the screw and carry water vertically. Waterfalls in fountains, like a tiered fountain, use both gravity to move the water from the top tier to the middle to the bottom basin and pump to repeat its journey. Fountain engineers developed different types of nozzles to spray the water in jets and fans and bouquets. Look at nozzle types from 1709 in The Theory and Practice of Gardening" by Dezallier d'Argenville. Draw a gravity based aqueduct and a waterfall.

There are many different types of fountains. Drinking fountains are popular places on hot days! Whether indoors or out of doors, drinking fountains provide sources of clean drinking water. Be sure that there are no signs that say non-potable or do not drink. Water with this label has not been treated to be safe for drinking by humans. Other fountains are for our pleasure. There are tiered fountains with layered bowls catching increasing volumes of water. The Spirit of the Great Lakes Fountain by Loredo Taft has tiers of shells held by maidens that represent the five Great Lakes with the highest, Lake Superior, spilling into Lake Huron, then Michigan, then Erie, then Ontario. Mirror pools are water features that reflect the sky and surrounding landscape. Infinity fountains create a pool that visually on one edge meets the horizon of air or sea or landscape and then disappears before being pumped back up to the top. Stepped fountains are like tiered fountains but often form a path or a natural scene of cascading rocks or levels. Animal fountains abound with frogs, horses, sea monsters, or dolphins spouting water. Draw different types of fountains.

Splash pads or splash fountains are surfaces and areas with intermittent jets that invite people to participate. Some jets spray straight up, and others arc sideways, surprising and refreshing. People come to play, refresh, cool off, and have loads of fun. Research splash fountains and do a drawing of splash fountain you would like to visit!