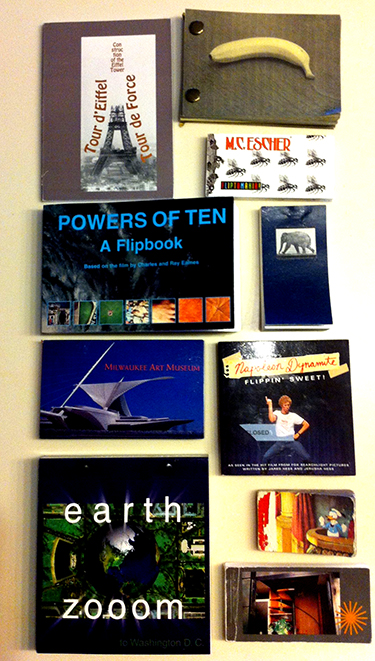 Anima is Latin for ‘the breathe of life’. Animation is a series of drawings that when seen in rapid order and succession, convey the concept of motion. The human eye can start to see fluid motion at 24 images per second, or 1440 images per minute. If an action takes one second to occur, then the action can be seen with 24 slightly different images of that action drawn out. There are three basic types of animation: cell animation, object manipulation, and computer-generated animation. Hand-drawn animation, or cells, can be put together in a bound flipbook, or photographed onto film or digital video to create an animated film. The first animation of hand-drawn images dates back to the 1890’s, with significant development coming from the Walt Disney Studios in the 20th century. Digital technology allows for the computer-generated animations of the 21st century that we see today from firms like Pixar. 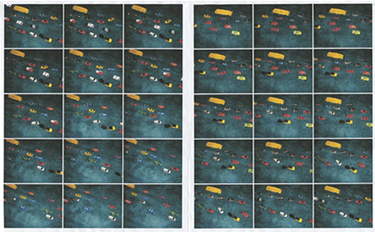 Start with 60 blank 3x5 cards. Then think of an activity or motion graphic that you would like to create. Plan ahead to assure that the motion can occur as you flip through the cards from one end to another while holding one edge firmly. It is best to start with a simple motion graphic: bounce a ball, throw a dart, walk a figure, open a door, or pop a balloon. Still image by still image make slight changes in each subsequent image, moving the image across the screen of your 3 x 5 card. See flipbook links to get started.

Locate a digital camera and tripod. Plan another series of movements but this time use real 3-D objects. Animate them by taking one picture with the camera, then changing the position of the object, taking a second picture, a third and so on. Then print the series and flip through the images as you did in Activity 1.

This activity is an introduction to exploring ideas with other people. It all starts with a group of people seated at a table, each with a drawing station, and each with tracing paper and drawing materials. The group discusses what the initiation of the animated piece might be. It could be an idea, a doodling adventure, an object, a space, or just about anything. Consider it an animation adventure. The initiation may be a question, an answer, a journey, or any combination of these and other ideas. The first person starts by drawing a line or two on a page; the next person traces that sketch and adds more lines; the third person traces the 2nd image adding more lines, and perhaps moving the lines into suggestive forms. Take a look at Tangents which shares a series of short animations based on artist’s images and each individual contributes to respond to the prior sketch to further develop it, or to alter it and take it to another direction. Animation is a wonderful series of frames in which to share and express ideas, individually or in a group!

To begin an animated film, generate ideas and concepts. Bring ideas together into a story line. Explore the story line through step-by-step or frame-by-frame drawings. You can arrange or rearrange the drawings to change the story line. You’re making a storyboard. A storyboard is a visual reference in the development of an animated film. It can set the scene, introduce characters, show actions. Storyboards can also be used to study scene moods, timing of a film, point of view of the camera and audience, and choreography. In this activity, come up with an idea and draw at least 8 frames. Change perspective or point of view and scale in the frames to see how this changes the visual experience.

Once a concept or script is written for a film or animation, the next step is to make a storyboard. A storyboard visually tells the story of an animation, panel by panel, kind of like a comic book.

Your storyboard should convey some of the following information: